Progress in all five corridors on track – CDC

Progress in all five corridors on track – CDC
by Ghaz Ghazali. Posted on October 1, 2010, Friday

KUCHING: The progress for all five development corridors in the country is on track towards materialisation by 2030, thus increasing the nation’s competitiveness within this timeframe.

ON TRACK: According to Recoda, SCORE has already gained an investment total of RM60 billion–almost one-fifth of the RM307 billion total investments that it is expected to eventually garner. 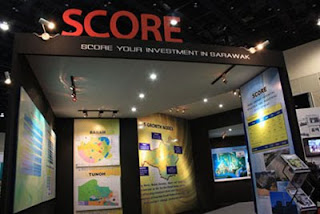 According to Corridor Development Corporation Bhd’s (CDC) group chairman Datuk Muhammed Kassim, all corridors have been gearing up towards meeting their respective short– and long–term targets.

“All corridors share one common goal: that is to contribute towards the growth of the Malaysian economy. Specifically, each is poised to become as a platform to bring in more FDIs (foreign direct investments) and PFIs (private financing initiatives) – two significant generators that should propel the nation’s economic growth in the next 10 years,” he told The Borneo Post at the four-day Brunei-Indonesia-Malaysia-Philippines East Asean Growth Area (BIMP–Eaga) Business Conference and Expo 2010 at the Borneo Convention Centre Kuching near here, which ended yesterday.

CDC is an agency set up to complement the government’s effort in attracting and facilitating capital injections into all five corridors.

Latest newsflow had also indicated that further capital injections worth billions of ringgit could flow into Iskandar Malaysia from neighbouring Singapore, by way of investment from the island republic’s own investors as well as multinationals having company bases there.

“The corridors’ primary goal is aimed at generating most of the investment from private sector driven initiatives. Investment in the ‘youngest’ of all the corridors: your very own Sarawak Corridor of Renewable Energy (SCORE); is almost 80 per cent to 90 per cent being private sector funded, comprising both from the country and foreign investments,” disclosed Muhammed Kassim.

SCORE had already gained an investment total of RM60 billion, according to figures given by Recoda (Regional Economic Development Authority) – a body set up by the State Planning Unit to manage and oversee the promotion of the corridor.

“The total is almost one-fifth of the RM307 billion total investments that SCORE is expected to eventually garner,” added Muhammed Kassim.

Separately, the manufacturing and industrial–oriented Northern Corridor Economic Region (NCER), covering the states of Perlis, Kedah, Penang and northern Perak, had received a RM13 billion–allocation from the government in the Tenth Malaysia plan, with private investment expected to total about RM30 billion.

The other corridor in the peninsula: the East Coast Economic Region (ECER) encompassing Kelantan, Terengganu, Pahang and Mersing in Johor; had raked in RM28 billion in expressed and committed investments from local and foreign sources thus far.

In his recent statement, ECER’s chief executive officer Datuk Jebasingam Issace John expressed his optimism for the corridor to attract some RM30 billion worth of FDIs by the end of this year, with its sight set on attracting investments from the Middle East, China, India, Japan and South Korea.

Meanwhile, SCORE’s counterpart in Sabah: the tourism–focused Sabah Development Corridor (SDC) had gathered more than RM4 billion in private sector–funding since its launch two years ago.

Additionally, Sabah’s Chief Minister Datuk Seri Musa Aman had announced recently that another RM20 billion worth of investments would be proposed for SDC, with some initiatives having been highlighted in the previous Budget 2010.

“Each of the corridors have their own designations and strengths. Like SCORE, it is a very attractive plan because of the variety of opportunities it has to offer, as well as its primary focus on high-powered industries and renewable energy as its niches.

“It is for this very reason that many foreign investors – from Japan, Hong Kong and Taiwan, for example – are anxious to know about SCORE and have expressed their interest to inject their capital into the corridor,” Muhammed Kassim pointed out.

Asked on whether there existed similar corridors in neighbouring countries, the CDC chief executive responded, “Yes, there are areas in Asean that share similar aspects as our corridors here. It is just that outside Malaysia, they do not call these (areas) as corridors.”

According to him, these ‘corridors’ were termed as Regional Growth Areas (RGAs) instead.

“For instance, there are RGAs in Sumatera, Indonesia as well as in Thailand and the Philippines, where respective governments will give grants to the private sector to develop these zones. In turn, the private sector will engage foreign investors to pump in FDIs there.

“Just like here in Malaysia, the focus on the establishment of each area depends on what is the strengths that each area has. Although CDC does not have any direct business venture or deal with them, but we go through their government agencies like their respective Economic Planning Units, or their State Planning Units,” explained Muhammed Kassim.
Posted by pak wan at 8:19 PM 1 comment: