KUALA LUMPUR, May 29 (Bernama) -- Japanese imaging company, Canon, expects 29 percent growth from the East Coast Economic Region (ECER) states as a measure of its confidence in the region's economic development.

He said Canon expected Pahang, Terengganu and Kelantan to be the next engine of growth in Peninsular Malaysia.

Canon had earlier announced it expected RM22 million in sales of its products from the east coast states this year.

KUALA LUMPUR, May 18 (Reuters) - The Terengganu Investment Authority, the investment arm of a Malaysian state, is to sell 5 billion ringgit ($1.40 billion) of bonds guaranteed by the federal government this week, it said in a statement on Monday.

The fund has been set up and labelled as Malaysia's first sovereign wealth fund and is modelled on similar concepts in the Gulf with the aim of investing oil revenues for the long term.

The fund said it would invest in tourism, energy and agriculture in the state, which is one of Malaysia's poorest, and would team up with sovereign wealth funds to invest.

"This week will see the sovereign wealth fund raising 5 billion ringgit from the capital markets on the back of a government guarantee," the authority said in a statement.

The fund said that investors would be "sourced from domestic and foreign capital markets" although it did not give any details on the state's oil revenues which will be used to securitise the bond.

Goldman Sachs has been advising the fund on capital raising.

The federal government and the state had been at loggerheads over the oil revenues, paid by Malaysia's Petronas, when the opposition took the control of the poor northeastern state in elections in 1999.

The federal government only started repaying money directly to the state in 2004 after it passed back into the hands of the National Front coalition that has ruled Malaysia for 51 years.

There is no firm data on the amount of money the state receives each year, although the state assembly was told last year that 7.364 billion ringgit was channeled to the state from the federal government in the three years to March 2007.

No one from the investment authority was immediately available for comment on the oil royalty revenues.

© Thomson Reuters 2009 All rights reserved
Posted by pak wan at 2:21 AM No comments:

THE quest for Malaysia’s next golden industrial crop has been endless since the success of oil palm, rubber and to a certain extent cocoa, pepper and tobacco.

Kenaf and jatropha have been the most talked about candidates so far.

Many would agree that kenaf seems to stand out prominently in the eyes of the Government given the amount of incentives, funding and the involvement of many government agencies like the Malaysian Timber Board, the National Tobacco Board and MARDI in undertaking intensive research and development (R&D) work on the crop. 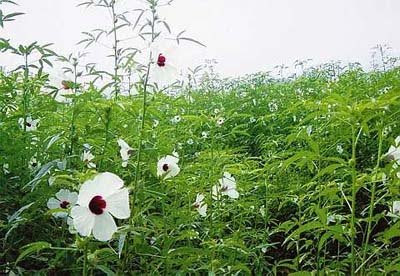 The kenaf plant ... some RM36mil has been allocated under the Ninth Malaysia Plan for the crop's planting

Todate, some RM35mil has been allocated under the Ninth Malaysia Plan for kenaf planting.

More recently, the United Nations Industrial Development Organisation endorsed Malaysia’s initiative by agreeing to test the commercial use of kenaf via funding from the Netherlands-based Common Funds for Commodities.

Kenaf, scientifically known as hibiscus cannabinus, is a jute-like plant from the hibiscus family that can be used as a raw material to make a multitude of products like high quality paper, bicomposites for automotive door trimmings and interior shelving, bioplastics industry, building materials like medium-density fibreboards and even high protein animal feed.

In fact, kenaf planting is heavily promoted by the Government as an alternative crop for the less competitive local tobacco farmers to consider in the advent of the Afta.

The Afta, which comes into effect in 2010, could result in lower prices and a reduction in import duties for tobacco.

Afta, to a certain extent, could negatively impact the competitiveness of Malaysian tobacco planters, whose cost of production is about RM10 per kg, almost doubled compared with their peers in Thailand and Indonesia.

It is also believed that the National Tobacco Board will help tobacco farmers integrate other crops with tobacco with the eventual goal to replace tobacco if planting it is no longer viable.

The East Corridor Economic Region (ECER) which covers Kelantan, Trengganu and Pahang todate has a combined allocation of 10,000ha to be planted with kenaf.

Sabah also aims to be a leading kenaf producer in the region, with the focus on processing kenaf into animal feed and fibre. It was reported that over 2,000ha have been earmarked to plant the crop.

But even as kenaf development gains momentum, many are still uncertain about the actual market demand for kenaf compared with jatropha, which is a globally accepted feedstock for biofuel.

Can tobacco farmers actually enjoy the same if not better income from kenaf?

The great task in hand now lies on the shoulders of the National Kenaf and Tobacco Board, which aims to export 50,000 tonnes or about RM15bil worth of kenaf annually from next year when Afta is enforced.


Hanim Adnan is assistant news editor at The Star. She believes kenaf cultivation can grow as big as oil palm and rubber.
Posted by pak wan at 2:17 AM No comments:

ECER Projects For Terengganu On Track

ECER Projects For Terengganu On Track

KUALA LUMPUR, May 3 (Bernama) -- The East Coast Economic Region (ECER) projects for Terengganu spanning tourism, manufacturing, petrochemical and agriculture industries are on track with the majority of them due to commence by year end.

He said ECERDC officials had just returned from an investment mission to Europe with state officials, which focused on high growth areas such as tourism, manufacturing and the halal industry that would create employment.

"Work on 21 projects began in 2008, 11 more will start by mid year, another 10 before year end while the two final projects will take off next year," he said in a statement here today.

He added the ECER projects in Terengganu were gaining traction.

"Kertih Plastics Park, the country's first fully integrated plastics park is expected to be fully operational in 2015, attracting RM2 billion worth of investments and creating more than 7,000 jobs," he said.

On the manufacturing sector, Issace John said Kemaman would be developed as the state's heavy industry park with integrated facilities which include designated areas for manufacturing, boat building and repairs and free zones.

ECER has also adopted a farm-to-table model for its agriculture programmes which encompass cultivating seeds to farming, processing, packaging and marketing both locally and internationally, he said.

Issace John added that ECER was collaborating with various government agencies to conduct seminars and trainings to increase Bumiputera participation in commercial and industrial initiatives.

"Among the initiatives lined up for implementation this year include a collaboration with Perbadanan Nasional Berhad to introduce a franchise development programme to cultivate at least 50 franchises in Terengganu," he said.

The companies are exploring the export of food and beverage products to the UK through the Malaysia Trading House, which is operating in London, the ECER secretariat said in a statement today.

In response to the increasing demand for halal products, Sheikh Ahmad said that Malaysia Trading House provides the platform for local halal entrepreneurs to enter and explore the UK and European market.

"Through this initiative, we aim to become a leading halal supermarket in London, as well as in Europe," he added.

Located in the historic Borough district in central London, the Malaysia Trading House is promoting products from 52 Malaysian companies, ranging from halal food and beauty products, to household and craft items.

There are two million Muslims in the UK but according to the UK Food Safety Authority, there are six million consumers of halal food nationwide.

Under the ECER master plan, Pasir Mas and Pengkalan Chepa in Kelantan, Chendering in Terengganu and Gambang in Pahang, have been identified for development as halal parks.

FRANKFURT, April 27 (Bernama) -- Representatives of Malaysia's East Coast Economic Region Development Council, who were recently part of a 70-member strong Malaysian business delegation on a visit to Germany, made a strong pitch before a large audience of potential German investors and invited them to avail of the "incredible business opportunities" available to them in Malaysia's east coast.

"We have earmarked a huge outlay of some RM15 billion (about US$4.1 billion) over the next 15 years. Half of the allocations will be spent for infrastructure development while the other half from the private sectoris to develop a number of industries," said Datuk Jebasingam Issace John, chief executive officer of the East Coast Economic Region Development Council, in an interview with Bernama in Frankfurt.

"We are looking at all approaches and programmes to accelerate the region's development firom five per cent to 7 per cent of the national gross domestic product and in the process expect to create half-a-million new jobs by 2020," he said.

Because of the imbalance in the development between the east and west coasts of the country, the Malaysian government's strategy is to develop logistics infrastructure, including ports, airports, roads and highways which will make shipments and distribution easier.

The private sector would concentrate on developing oil, gas and petrochemicals, resource-based manufacturing industries, tourism, agriculture and education, he said.

One of the "most important projects," according to Jebasingam, is development of the Kuantan Port which will offer connectivity to two billion people in the Asia-Pacific region.

"Kuantan Port is also being developed to accommodate larger vessels of the current generation. The expansion is being done to facilitate oil and gas shipments and other commodities, mainly, to Asean markets.

"We are also developing a free trade zone and a transshipment hub for the automotive cluster in the Pekan Automotive Industrial Park," he said.

Jebasingam said the ongoing global recession might take longer than a year but emphasised that Malaysia would be spared "because of our regulatory controls that are in place to manage the banks".

Malaysia's Central Bank, he said, was doing a "good job" whereas in Europe and elsewhere there was a "free for all" with little or virtually no controls.

"Thus Malaysia has a better chance of getting out of the recession ...we don't have a credit crunch," he added.

RM130mil varsity project in Kelantan to go on

JELI: The university and polytech-nics planned for Kelantan will be implemented as scheduled, the global economic crisis notwithstanding, International Trade and Industry Minister Datuk Mustapa Mohamed said.

The RM130mil University Malay-sia Kelantan (UMK) campus project, approved in 2007, is one of 20 universities approved nationwide.

“The Government cannot afford to stop the projects as doing so would affect the educational needs of the people,” he said yesterday, after visiting victims of a fire that razed 11 hou-ses and shoplots at Air Lanas here.

Mustapa, the Jeli MP, added that the UMK complex, to replace the temporary campus in Pangkalan Chepa, would be built on a 232ha land in Tangok, Bachok.

Infrastructure projects in rural areas for roads, village development and flood mitigation will also continue as scheduled. “These projects are important and if there is a need to increase the allocation, the Government will consider it,” said Mustapa.

“They are important to boost economic activities,” he added. A total of 1,500 houses were also being built in Jeli for the poor.