KUALA LUMPUR, Aug 5 (Bernama) -- SIRIM Bhd is expanding its services to cater to the industry needs at the Eastern Corridor Economic Region (ECER).

In a statement here today, SIRIM said it would provide the ECER technical assistance and human capital development in the areas of metal fabrication technology, packaging and labelling and post-harvest machinery in agriculture.

"These services will also be expanded to new companies which are expected to be established in ECER, it said.

Minister of Science, Technology and Innovation, Datuk Dr Maximus Ongkili, said with the development of Tanjung Agas in Pekan, Pahang as part of ECER zone to create activities in petrochemical and fabrication engineering work, the demand for these services was expected to grow significantly.

"This will provide opportunities for employment to the local community and small medium enterprises (SME) technical support services," he said.

SIRIM, he said, has been actively involved in SME development activities, which included the enhancement of product packaging and labelling in the food-related industry.

"This is in line with the objective of ECER in upgrading and improving the product presentation of companies which are operating in this region," he said.

He said SIRIM has also proposed to train and assist welders to be qualified underwater welders and inspectors under the Tenth Malaysia Plan (10MP).

Ongkili said this skill was in demand especially in the petrochemical (offshore), port, marine (ship maintenance and repair) and liquid-filled tanks.

For this, he said, SIRIM proposed an allocation RM6 million under the 10MP to cover infrastructure development, human capital development and equipment for the underwater welding centre in Pahang.

Malaysia Has To Change To Innovation-Based Economy, Says Najib

Malaysia Has To Change To Innovation-Based Economy, Says Najib

KUANTAN, Aug 4 (Bernama) -- Malaysia needs a paradigm shift from a knowledge-based economy to innovation-centred in order to stand in the same row with advanced nations, Prime Minister Datuk Seri Najib Tun Razak said today. "This is important especially in efforts to integrate the economy with the global economic network.

"We are determined to continue to bring changes to the economy. Now, we are working towards innovation-centred economy. The three main features are creativity, innovation value and high skills," he said when launching MSC Malaysia Pahang Initiative. Najib said the MSC Malaysia was a crucial initiative in ensuring innovation was at the highest level. So far, MSC Malaysia has set up more than 2,300 MSC-status companies which have provided 80,000 highly-skilled jobs.

On the national broadband penetration plan, the prime minister said Malaysia had achieved 26 per cent so far and aimed to increase it to 50 per cent by next year.

"The government is confident of achieving the target. If we attain the 50 per cent target, a study by the Economic Planning Unit showed it would boost the national GDP by 1.2 per cent," said Najib who is also Finance Minister.

It will complement the East Coast Economic Region development plan through the use of ICT.

MDeC is now the strategic advisor to the Pahang State Government and will be working closely with the Pahang Technology Resources Sdn Bhd (PTR), the One Stop Agency for MSC Malaysia Pahang to plan and implement ICT programmes.

PTR is a company wholly-owned by the Pahang state government.

Najib said the government had approved RM12.86 million to the Multimedia Development Corp (MDeC) under the second stimulus package for the implementation of MSC Malaysia ICON programme for the rivate sector.

This is in line with the government's aspiration to increase the national broadband penetration and generating demand through the enablement of online content.

The MSC Malaysia ICON programmes include the award of grants to small and medium enterprises to develop and re-purpose the educational and social networking based content for online enablement, development program targeted at local developers to produce mobile and online applications.

Besides supporting the effort to increase the national broadband penetration, the MSC Malaysia ICON programmes intend to open up opportunities for local entrepreneurs to participate in the development of online contents through targeted support in the areas of project funding, skills development and infrastructural requirement.

The Prime Minister said the SEZ was expected to contribute more job opportunities and yields compared with the East Coast Economic Region (ECER).

The SEZ covers an area of 3,875 sq km from Kerteh in Terengganu to Pekan and Gambang in Pahang.

Najib said the ECER SEZ was part of a new economic model designed by the Government that promises a fairer distribution of wealth and growth to be enjoyed by all. 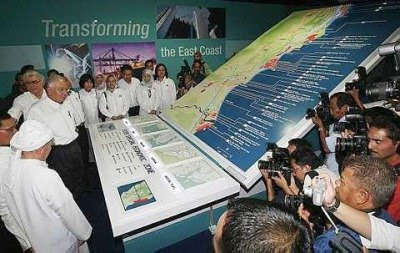 “It will involve construction of additional berths and wave breakers that will see the port becoming the main entry and exit point for the export and import of goods,” Najib said in his speech at the launch of the ECER SEZ at Runchang here yesterday.

In a move to attract investors, the Government will approve a set of special incentives for them including tax exemption for 10 years, Najib told reporters later.

“The Government has decided to offer additional incentives for those who showed merit, on top of those that have already been given. This will be on a case-by-case basis,” he added.

Najib also launched the Pekan Agropolitan Project that promotes the development of growth centres in the rural areas to provide sustainable income and eradicate hardcore poverty.

He later witnessed the exchanging of the cooperation agreement between ECER DC and Felda, which is the main implementing agency to manage participants in-volved in the agropolitan project.

The participants will be involved in oil palm plantation and sheep rearing as the primary activity. 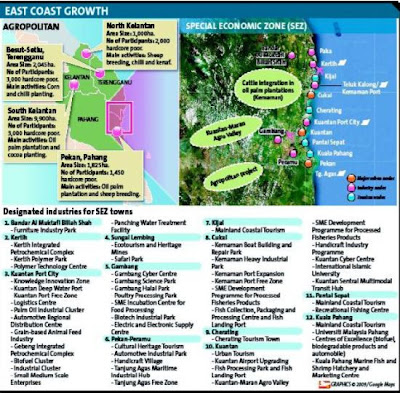 Najib also said the Government would consider creating SEZs in other areas in the country if they were suitable.

He said the SEZ would not affect the development of the ECER.

The STAR Online
Posted by pak wan at 11:58 PM No comments:

The SEZ was aimed to attract 90 billion ringgit (25.7 billion U.S. dollars) to an area covering two east coastal states of Terengganu and Pahang, said Malaysian Prime Minister Najib Tun Razak when he launched the zone in Pekan, his hometown in the Pahang State.

He said that SEZ has special incentives for investors, including a ten-year tax exemption, 100 percent investment tax allowance, and exemptions from import and export duties.

ECER was launched in 2007 by former Prime Minister Abdullah Ahmad Badawi and it was aimed to develop the east coastal area covering four Malaysian states of Kelantan, Terengganu and Pahang,as well as Mersing, a northern district of the Johor State.

PEKAN: It’s all systems go for the first phase of a sheep farming project here with the arrival of a batch of 649 sheep from Australia.

Sheep rearing is one of the primary activities under the Ecer masterplan. The other is oil palm plantation. The RM90mil sheep husbandry project with 3,500 sheep is spread out over 2,000ha in Kampung Runchang, an orang asli resettlement area, and Batu 8 Mukim Bebar. 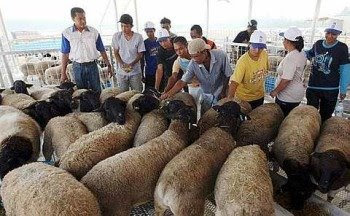 Hardy animals: The herd of Dorper sheep at the Ecer station in Kampung Runchang, Pekan.

Youths from the local communities are hired as general workers and trained in the day-to-day duties of sheep farming.

The newly-arrived herd of Dorper sheep made up of 28 rams and 621 ewes reached the Kampung Runchang station after a 24-hour journey by air and road that started in Melbourne.

Thirty villagers have been hired to care for the sheep housed in six production units. 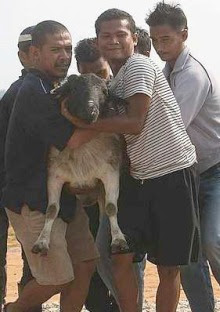 Heavy job: Workers carrying a sheep to its hut.

He said they would have the rest of the day free to take on other jobs such as collecting rattan in the forest and working on construction sites.

“With the project, they will have permanent jobs and a fixed income.

Worker Khairil Nizam Ali, 23, said he had been searching for a permanent job for some time and was glad to be offered the job at the farm.

He said he did not earn much previously at a fruit orchard nearby.

Khairil hoped the experience and knowledge gained from the project would enable him to start his own sheep farm.

Azian Semana, whose husband works on the farm, said she was happy her husband Rizal Manaf, 24, had a permanent job.

She said that Rizal had worked in Kluang, Johor, and she had been worried about him living away from the village.

“We have a daughter and she missed him a lot when he was away.

“It is good that my husband has a job here now,” she added.

The project in Kampung Runchang is the first of its kind in this country, with Felda being appointed as the implementing agency.

The Dorper breed was chosen because it requires minimal input of labour and is considered an economical breed. It does not need shearing or crutching and is disease-resistant. It is a South African breed developed by crossing the Dorset Horn and Blackhead Persian breeds.

The Dorper is the second-largest breed in South Africa with over 10 million head. In recent years, it has become popular in the Middle East, Canada, Australia, South America, Mexico and the United States.

In the Malaysian project, it is being reared for its meat.

Mohd Yusof said that pure-bred Dorper rams could reach 120kg while the ewes weighed about half of that.

“The Dorper can thrive in harsh conditions. They are a fertile breed with the potential for lambing every eight months,” he said, adding that the second phase of the project involving Mukim Bebar was expected to start in September.

PEKAN, Aug 4 (Bernama) -- Datuk Seri Najib Tun Razak said on Tuesday the government is committed to continuing with the regional development plan for the country.

"Under the 9MP alone, the government has allocated an additional RM2 billion to carry out suitable projects," he said when opening the East Coast Economic Region Special Economic Zone (ECER SEZ) at the Agropolitan Town here.

He said regional development was not a new concept but had been practised by the country's second prime minsiter, the late Tun Abdul Razak Hussein, and modernised by Tun Abdullah Ahmad Badawi.

"I want to express my aspiration, as Tun Abdullah's successor, for the corridor development concept to be enjoyed here now," he said.

Najib said the concept had a huge impact, especially in generating wealth which could be enjoyed equitably and comprehensively by all strata of the society in line with the country's development.

He also said that regional development was in keeping with the 1Malaysia concept which stressed social justice for all.

"The concept of regional development is not about a cluster which focuses on investors only but a concept centred on the people, people first, from large projects so that the ordinary folk can benefit," he said.

He said, for example, that the Agropolitan project could eradicate hardcore proverty among 45,000 households nationwide by the end of next year.

PUTRAJAYA: Five growth clusters will be established within the East Coast Economic Region (ECER) to step up development and economic growth in the area.

The clusters are petroleum, gas and petrochemical, agriculture, education, manufacturing and tourism. 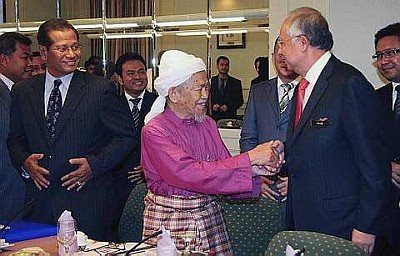 This was among decisions made at the ECER development council meeting chaired by Prime Minister Datuk Seri Najib Tun Razak yesterday.

The meeting also discussed the establishment of a port city, a centre for automotive industry in Pekan, Pahang, a plastic manufacturing centre in Kerteh, Terengganu, and an agropolitan project, among others.

Najib will spell out details of the five clusters after launching the agropolitan project in Pekan today, which is expected to provide jobs to 5,000 locals.

The STAR Online
Posted by pak wan at 11:48 PM No comments: