Earlier this year, three investments worth RM363 million had been approved.

Najib, in a statement issued after chairing the ECER development council meeting here yesterday, said the 12 investments were expected to create 20,000 jobs.

They will contribute an estimated RM6 billion to the gross national income by 2020.

“This is a positive start to the year and I am confident ECER will be able to exceed its RM10 billion investment target for 2012,” Najib said.

Up till December last year, ECER had attracted RM20.9 billion in investments, creating more than 27,000 jobs.

To date, the government has invested RM2 billion on infrastructure development in ECER to support the private investments.

Najib, who is also ECER development council chairman, said the scale of these latest investments was an endorsement of ECER’s competitiveness in attracting investors.

Of the RM9 billion investments, 70 per cent will be in ECER’s tourism cluster and the rest in aquaculture, manufacturing and education sectors. All the projects are expected to be implemented this year.

“I am proud to note that the bulk of these investments are from Malaysian companies. This proves that there is still capacity for more local companies to invest domestically,” Najib added.

Leading the investments were Radiant Starfish Development Bhd, which will invest RM4.2 billion in developing an integrated
ecotourism resort to be called Mersing Laguna, on 809ha off the coast of Mersing, Johor.

The project is expected to commence in the second quarter of this year and provide 12,600 jobs by 2014. Half of the investment will go towards land reclamation and infrastructure.

The town of Mersing will also see a RM1 billion resort town to be developed on 142ha by Johor Corp’s wholly-owned subsidiary, Damansara Assets Sdn Bhd.

Work on developing the Tanjung Leman Integrated Resort and Coastal Township will commence in the second half of this year, to be completed in 2022.

Another investor, Encorp Bhd, will spend RM1.3 billion to develop an integrated tourism resort and international golf course on 404ha in Cherating, Pahang.

The aquaculture sector in the ECER, meanwhile, will see the development of integrated shrimp farms in Marang, Terengganu, and Rompin, Pahang.

The one in Marang is a joint venture project between Ocean Aquatic Marine (M) Sdn Bhd and China’s Zhangjiang Guolian Aquatic Products Co Ltd, with both parties investing RM1 billion over a five-year period. The project will start by July.

Andaman Sea Foods Sdn Bhd is investing RM225 million in a 800ha shrimp farm in Rompin. It will take off by year-end.

From cleaner to proud owner of cake shop 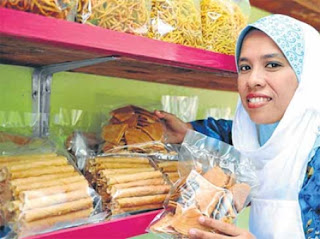 KUALA LIPIS: FAZLINAWATI Abdul, who used to sell kuih from house to house in her village, never dreamt that one day she would be able to have her own bakery.

Thanks to the East Coast Economic Region (ECER) empowerment programme, she is now the proud owner of Qaseh Alina, the first bakery in Kampung Telamin, near here.

Fazlinawati's success has made her a role model for the ECER empowerment programme, which was introduced to provide employment and entrepreneurship opportunities, increase the income of participants and boost the academic achievements of students in the east coast.

"After joining the programme last year, I have learnt cake-making and how to run a business.

"I managed to earn an additional income of more than RM1,500 monthly, which helped me to open a cake shop in just a year," said the 37-year-old mother of two.

Fazlinawati is the first ECER empowerment programme participant who opened a shop with her own money.

She recorded brisk sales throughout last year, especially during Hari Raya Aidilfitri when she raked in more than RM5,000 a month.

In the initial stage, Fazlinawati would send her kuih to her customers' homes or offices. When her products received good response, she started to supply frozen kuih in bigger quantities.

Among her popular products at that time were frozen curry puffs and kuih sepit (love letter).

"I plan to expand my business by producing and distributing other food products, including noodles and rice vermicelli," said Fazlinawati, who also makes birthday and wedding cakes.

"We hope more entrepreneurs will be produced through this programme," he said, adding that ECERDC would introduce free courses under the programme in Cameron Highlands, Raub and Bachok soon.

The East Coast Economic Region in Malaysia has targeted to double its investments to MYR 10 billion for 2012, underpinned by interest from top Asian communities like China.

Its industrial parks located within the Special Economic Zone are expected to drive these billion ringgit investments.

Mr Jebasingam Issace John CEO of ECER said that "The SEZ will be our jewel in the crown in Malaysia. We expect the investments to come on board by the third quarter."

The risks of the slowing investment flow from Europe may impact Malaysia as a whole in 2012, but Mr John says the ECER has the added advantage of having caught the attention of the Chinese, Koreans and Japanese, who are also being encouraged to look abroad.

Its location is an advantage, which would benefit China's investing community. Among the most recent influx of investments totaling close to MYR 5 billion include a MYR 2 billion industrial biotechnology investment in CJ Arkema, a JV between a South Korean and French company, as well as Wenzhou Foreign Trade and Economic Cooperation Bureau's plan to invest MYR 900 million in integrated industrial park in Kuantan.

The other is the MYR 1.8 billion integrated steel mill investment via Eastern Steel, a JV between Hiap Teck Venture Bhd and China's Shougang Group.

Mr John said that "Being the hinterland to East Asia is one good reason as it provides an inter regional hub for China India as an eastern gateway of Malaysia."

With the MYR 2 billion basic infrastructure put in place by the government, the ECERC is aggressive in marketing the economic corridor to Asian and Middle East investors, while focusing on individual companies like it did in the case of Eastern Steel in 2011.

Being just two hours away from Kuala Lumpur, the 25 kilometers by 140 kilometers strip that extends from Kertih in Terengganu to Pekan in Pahang includes four ports, two airports and innovation zones to support development in manufacturing, oil, gas and petrochemical, agriculture, tourism and education.

Mr John said that "To our investors, it is a MYR 4 billion market within the Asia Pacific region, especially since the commitment to convert Kuantan into a deepwater port."

Into its fourth year since it was set up, the low key ECERC reckons its potential will enable it to perform as well as the other growth corridors, if not outperform them.

Straddling Kelantan, Terengganu and Pahang as well as Mersing in Johor, it is emerging as a dynamic and competitive investment destination to both local and international investors. Being a mix of Brownfield and Greenfield is an added advantage.

Mr John said that "The region may be lagging but at least we can differentiate ourselves from the others in that with our Greenfield, potential investors can undertake sustainable type models and develop the ECER in a sustainable manner."

Mr John said that unlike the other growth corridors, the ECER has various challenges which need to be positioned in the correct perspective. He added that "We need to accelerate growth, increase income levels and improve quality of lives. So, projects in ECER need to ensure significant contribution to GNI (gross national income) through job creation which will raise income levels, which impact measurements are in line with the Economic Transformation Program."

SEZs contribute to 80% of the gross domestic product of the region, where the income disparity is high compared to the west coast. Poverty programs are ongoing with the Pekan metropolitan in the advanced stage, enabling incomes to rise to MYR 1,200 already.

Mr John said that the human resource aspect is catered to the niche needs of investors. He added that "Within the one and a half years of investors setting up their facilities, ECERC will see to it that their manpower aspect is provided for, through training skills provided by the 20 centers and universities and colleges to custom fit their needs."

According to Mr John, the time is ripe for SEZ as it is the only one of its kind offering integrated projects from ports to manufacturing, while many infrastructure projects are near completion with many customized incentives already in place.

The SEZ has targeted a total of MYR 90 billion investments by year 2020 and will be a catalyst for economic growth, in line with the government's aspirations of moving into the New Economic Model.

The Automotive Industrial Park in Pekan Peramu area is a self contained park to cater for automotive manufacturing and assembly activities. The park has so far attracted big automotive names such as Mercedes, Isuzu, Suzuki and now Volkswagen.

Apart from the palm oil industrial cluster in Gebeng, there is the Kertih Polymer Park, the country's first fully integrated plastics park, which takes on a plug and play model where requisite support facilities and common services are put in place.

Also within the SEZ is the Gambang Halal Park, a premier park which can create MYR 1 billion investments almost immediately as there is feedstock of livestock, fishers readily available.

Mr John said that "We got interest from China and Middle East and hope by end of the year to see significant movements." He said the Kemaman heavy industrial park can take up MYR 5 billion in new investments, following closely on the heels of Eastern Steel's ground breaking in December 2011.